How to organise your git commits 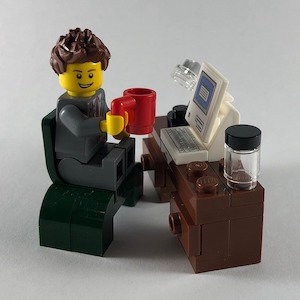 Suppose that in a fruitful day of work you:

At the end of the day you may either push it all in one commit, or perhaps create a commit for each of those changes. In this post I'll argue that the latter choice is often better.

The benfits of separate commits

Let's examine how possible future tasks will be affected by keeping these changes in separate commits:

If you make a PR, or someone wants to review these changes, it would be much easier to do with separate commits. They could quickly skim the rename commit which has lots of repeating boring changes, and they'll see all the bugfix's changes coherently grouped together. For the colors-change commit they may just have a glance on the new look and won't even need to examine its code representation.

You may discover some bug in the future, and do a git bisect to find what change introduced it. With the commits separate, you'll get better more specific information when it pinpoints which commit introduced it.

When resolving merge conflicts in the "small pieces" flow, a lot less mental effort is involved when the changes are separated and explained in their commit messages. For example when resolving the conflicts resulting from the rename, sometimes just repeating the git-search-replace followed by git-mediate will be enough to resolve them.

When trying to find where code originated using tools like DeepGit or magit, these tools are inteligent enough to recognize file renames and find the actual origin of the code before the rename. But if we mix too many changes together then their heuristics for recognizing renames may fail.

How to make the commits well organised

Example situation: You made the colors change, then the rename, and then did another color change.

One way to do things is to make a local commit after each change (one should use git add -p to make sure they're only adding the relevant changes to each commit). Doing this, after these changes you'll have three commits. Then before pushing, a git rebase -i can be used to squash the two color changes into one commit.

It's good to split commits to coherent units, where renames are separate from bugfixes, etc. It's not only good when working in a team, but even when developing something alone. But note that there's no need to take it to the extreme and split them even further to microscopic commits (then just reviewing the list of commits will become tedious).